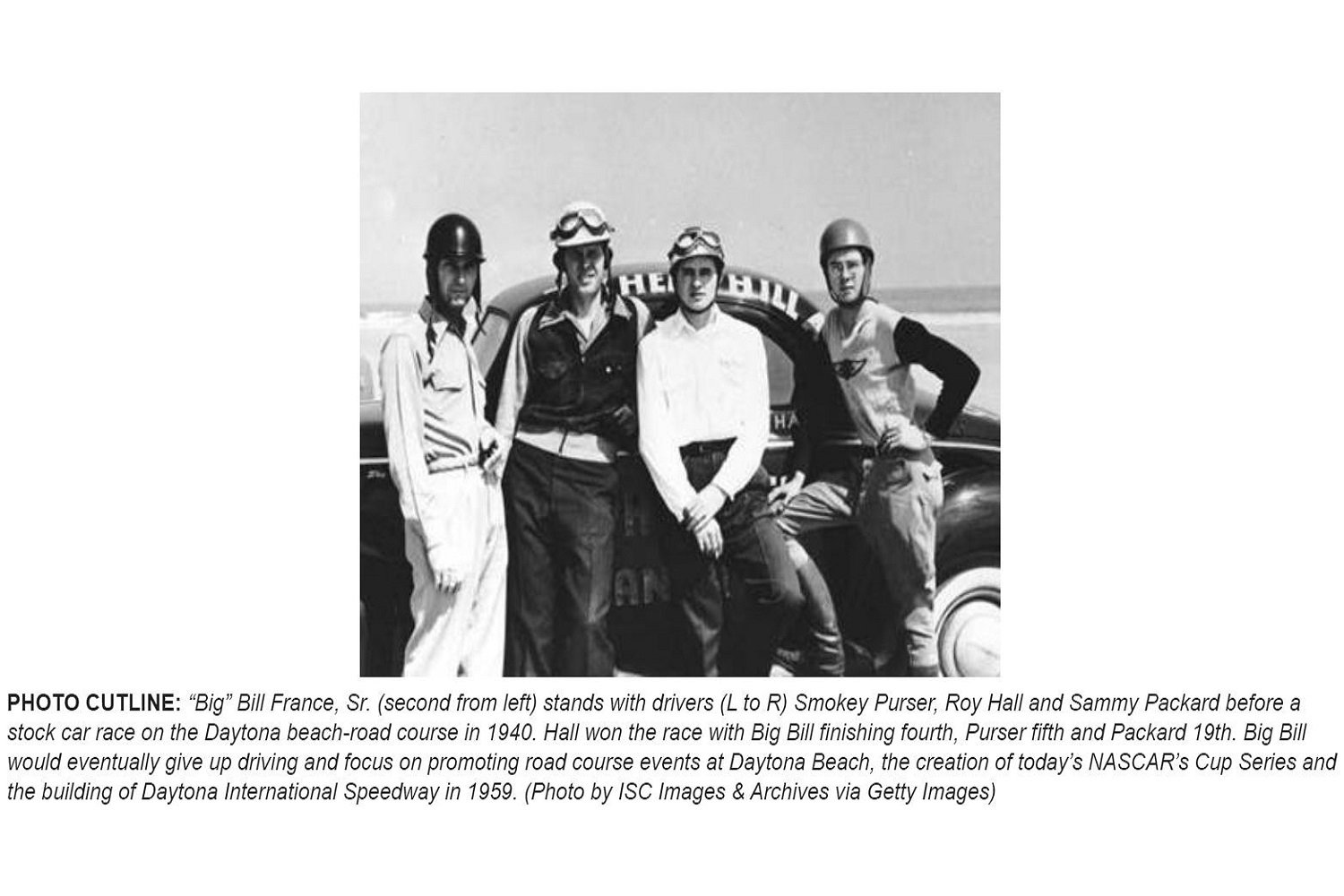 Daytona Beach, FL - As the NASCAR Cup Series gets ready for its regular-season finale in the summertime classic Coke Zero Sugar 400 at iconic Daytona International Speedway on Saturday, Aug. 28 (7:00 p.m. ET), thoughts go back to the 1930s when racing really began in Daytona Beach, “The Birthplace of Speed.”

For the second consecutive year, the historic Coke Zero Sugar 400 will serve as the last-chance race to make the 16-driver, 2021 NASCAR Cup Series Playoffs. The first summer Cup Series event (250 miles until extended to 400 miles in 1963) at the high-banked Daytona International Speedway saw Fireball Roberts win on the 2.5-mile layout in 1959, just months after the grand opening of the World Center of Racing and the inaugural DAYTONA 500.

Prior to hitting the 31 degrees of banking, however, the concept of racing modified stock cars on a circuit that utilized both the Daytona’s Atlantic beach shoreline and the pavement of State Road A1A became a reality in 1936. The original 3.2-mile beach course had the north turn located near the center of town. It ran approximately 1.5 miles north on the beach and then 1.5 miles south on a paved, public roadway with two portions connected by banked, sand turns.

Entered in the event was a larger-than-life man named “Big” Bill France. He witnessed the final year of speed runs on the beach in 1935 and was fired up about what Daytona meant to auto racing on a global scale. His enthusiasm was largely born out of being a competitor, even though the idea of promoting races was lurking in the back of his mind. He finished a solid fifth in the 250-mile event, and knew that he could win stock car races on a regular basis, but also if pressed into service, he could be a successful promoter.

The first couple of years the road course lost money, and the local chamber of commerce approached Big Bill, asking if he could help find a promoter for the road course. The idea of promoting a race excited him, and he told city officials he was the perfect man for the job. While driving a race car at various tracks across the Southeast owned by Daytona Beach restaurant owner Charlie Reese, Big Bill asked Reece if he would give support financially to help him promote the beach course. A partnership was formed, and Big Bill began to wear two hats.

In 1939, Bill Sr. accelerated his driving and promoting ambitions, and the Daytona beach-road course was becoming successful. Behind the wheel in races on the beach-road course, he finished fourth and second, and a year later, he had a break-through victory, along with other track wins to win an “unofficial championship” crown. He would promote races on the beach and at various tracks in North Carolina before the attack on Pearl Harbor in December 1941, which halted racing. Post war in late 1945, the Daytona beach-road course needed a tune-up and renovations after several years of inactivity, and in the spring of 1946, stock car racing was reborn.

The realities of a growing Daytona Beach populace on the beachside forced Big Bill to abandon the original 3.2-mile layout at the end of 1947. He was running out of room to both race and provide space for spectators.  A new 4.1-mile course near Ponce Inlet was created in 1948 where the stock cars would compete.

On Feb. 21, 1948, NASCAR would become officially incorporated. Big Bill would be in charge of the new sanctioning body, promoting not only races at the beach-road course but a full championship schedule as well. NASCAR was founded on the simple idea that many people loved revved-up engines and fast cars as much as Big Bill did.

The modified stock cars that had been competing were not the only direction Big Bill wanted to go in moving forward. In 1949, he demonstrated his determination for a vision he had years earlier, but had been delayed by the war. From 1942-46, a small amount of consumer cars had been built, reducing the availability of the machines from showroom floors by the car manufacturers. It was now time for his “Strictly Stock” concept (what would become known as the Grand National Series, and years later, the NASCAR Cup Series), a series for new sedan cars, that would produce a national championship series.

The first Strictly Stock race was held in Charlotte on June 19 on a ¾-mile dirt track. Then, less than a month later, on July 10, 1949, the first Daytona beach-road course for the Strictly Stock division was held. It was the beginning of bigtime beach-road course racing in Daytona Beach and the phrase “win on Sunday, sell on Monday” for the car manufacturers. It would become a mainstay in the foundation of the sport for the next decade, and many of its winners would read like a “Who’s Who” of NASCAR legends.

During this time period, Big Bill saw that the days of racing on the beach-road course were numbered due to the spreading land usage of a rapidly growing population and huge race crowds. He put a plan for the future of Daytona Beach in motion with a proposal to construct a permanent speedway facility that would become Daytona International Speedway. As they say, the rest is history.

Fans can catch this exciting conclusion to the regular season – the Coke Zero Sugar 400 – by purchasing tickets starting at $49 for adults and $10 for kids 12 and under. Fans who purchase tickets to the race can also purchase access to the UNOH Fanzone for $60. Here, fans can participate in events before the race. This includes, but is not limited to, the return of the traditional Coke Zero Sugar 400 Pre-Race Concert featuring Chris Lane, pre-race ceremonies, driver introductions, access to the large grass ballfield, signing the start/finish line through the middle of the 18-degree, banked trioval. Also scheduled is LIVE entertainment on the main UNOH Fanzone Stage, including NASCAR Personalities Fan Q&A. Fans can also get photos with the winning trophies of the weekend in Ruoff Mortgage Victory Lane.

Tickets to the Xfinity Series Wawa 250 Powered by Coca-Cola are also available, starting at $35 for adults and FREE for kids 12 and under. The Wawa 250 takes place the day before the Coke Zero Sugar 400 on Friday, Aug. 27, and access to the UNOH Fanzone will be available before this race as well! A Two-Day Pass is available which includes access to the Coke Zero Sugar 400 on Saturday, and the Wawa 250 on Friday. These passes start at $69 for adults.

Tickets for the Coke Zero Sugar 400 and the Wawa 250 Powered by Coca-Cola can be purchased online at www.daytonainternationalspeedway.com or by calling 1-800-PITSHOP.