ANALYSIS: COVID-19 Vs. The Workforce

News Daytona Beach sits with WNDB's financial analyst to see how exactly COVID-19 is affecting workers around the country.

Be sure to listen to Sean's full interview with Robert Mara, where they discuss how veteran's might be affected and how the oil and gas industry is doing. Click here for the full interview

Daytona Beach, FL - Weeks into a health crisis and the United States is starting to feel the pressure now when it comes to the nationwide workforce.

That pressure comes from the number of unemployed Americans, which rose 1.4 million to 7.1 million throughout March. As a result, the unemployment rate in the United States climbed by almost a full percent, bringing the rate to 4.4%, which is the largest over-the-month increase since January 1975.

To get a better idea at what's going on, News Daytona Beach reached out to Robert Mara, financial analyst for WNDB and investment director of Holland Financial.

On first observation, unemployment rates fell consistently over the past decade, with a few minor upticks over time. However, come March of 2020, the number of unemployed Americans rose. 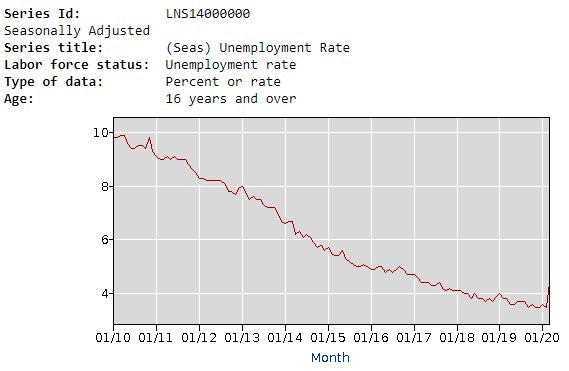 "Anybody who has been following current events shouldn't be surprised by these numbers," said Mara. "When you have large portions of the workforce that are mandated to stay home... you're going to get millions of unemployment claims."

The Bureau of Labor Statistics also reported that two-thirds of the drop nationwide occurred in the leisure and hospitality industry, which fell by about 459,000 workers. And a majority of that (417,000) were employees in food/drink services. That can be attributed to a swath of business closures across the US and an increase in layoffs as companies begin to adopt cost-saving strategies.

On the contrary, the United States government actually added around 18,000 jobs, with 17,000 of them earmarked specifically for the 2020 Census. Mara says a jump like this is to be expected though, especially with the current problem at hand.

"When you have a lot of ammunition being fire on a particular problem, you have to expand that bureaucracy, you have to add workers," said Mara.

However, when things begin to slow down, Mara believes that a good majority of those workers might be laid off, since the government doesn't need that large of a workforce. Once that happens, those workers will begin to compete with those who are already trying to get their old job back, possibly making reemployment harder in some cases.

Now, this information is more so a blanket coverage of the entire United States. When you try to boil the information down to just Florida, analysis can get a little tricky, since the Florida Department of Economic Opportunity only has figures up to February.

And according to the available data, Florida had a statewide unemployment rate of about 2.8% in February, which represents 291,000 individuals of a workforce close to 10.5 million.

"When that new data comes out, we're going to see a huge increase in the number of unemployed," said Mara.

Mara says that because unemployment is a "lagging economic indicator," meaning that the numbers reported only serve as a representation of those who actually filed for unemployment. And, unfortunately, that's even getting harder to do.

Around the nation, a number of agencies are struggling to process those applying for unemployment due to the sudden influx of those now out of work. One report from NBC News claims that multiple unemployment sites around the country crashed because of the sudden flood of traffic.

In response, agencies began to implement new steps and actions to help improve the accessibility of unemployment assistance. In Florida, CareerSource offices began to provide paper applications, while FedEx offered free printing and mailing for paper applications at over 100 storefronts across the US.

But, what happens when people start going back to work? Will people be able to find work?

Getting Back To Work

During a phone interview, Mara said it could be likely that some furloughed/laid off workers may have difficulty finding jobs either in their former place of work or in their industry, since some companies might need time to heal financially before large-scale employment is feasible again.

In his example, Mara said to imagine a small company that furloughs five out of ten workers. When things come back, whether it be slowly or quickly, they find out they can only hire back two or three of those workers, thanks to the losses they felt during the height of the pandemic.

"It would be very naive for anybody to think that everyone who was affected by unemployment during COVID-19 is automatically going to rejoin the workforce at the same place they were employed prior to. That's (problem) number one," said Mara.

The second problem according to Mara is how affected each part of the country is. For example, the effects of COVID-19 in a state like Newbraska may differ from the conditions felt in a state with a higher population or a different environment, like California.

"It will really depend on how fast a municipality, a state, a region of the country can reemploy the workforce that was being laid off," said Mara. "It's really going to be region, state and even city specific."

Additionally, Mara added that places like Florida may take a little longer to recuperate, especially since a majority of the state is dependent on the leisure and hospitality service industry.

Another Drug House Shut Down By Flagler County Sheriff's Office

Local News
Arguments Rejected On "Red Flag" Law
Tallahassee, FL - In a case stemming from threats made by a teen to shoot school classmates, an appeals court Friday rejected a challenge to a state law that allows authorities to remove guns if …

Flagler County, Palm Coast Restoring Parks Activities Tomorrow
Bunnell, FL - Parks activities are being restored tomorrow in Flagler County and in Palm Coast. Social distancing and other CDC guidelines will be part of the process.  Sports fields and …

More Details Emerge On Reopening Universities
Tallahassee, FL - A week after the state university system’s Board of Governors laid out a blueprint for how to reopen campuses in the fall, school officials are offering more details about …
Another Drug House Shut Down By Flagler County Sheriff's Office
Palm Coast, FL - Multiple complaints sent to the Flagler County Sheriff's Office lead to the shut down of another drug house in Palm Coast. In fact, according to Flagler Sheriff Rick Staly, …

Deltona Woman Freed After Being Held Captive By Ex-Boyfriend
Orlando, FL - A 21-year-old Orlando man is facing a multitude of charges including kidnapping after he held his ex-girlfriend captive for two weeks in a motel. Authorities say the 27-year-old …